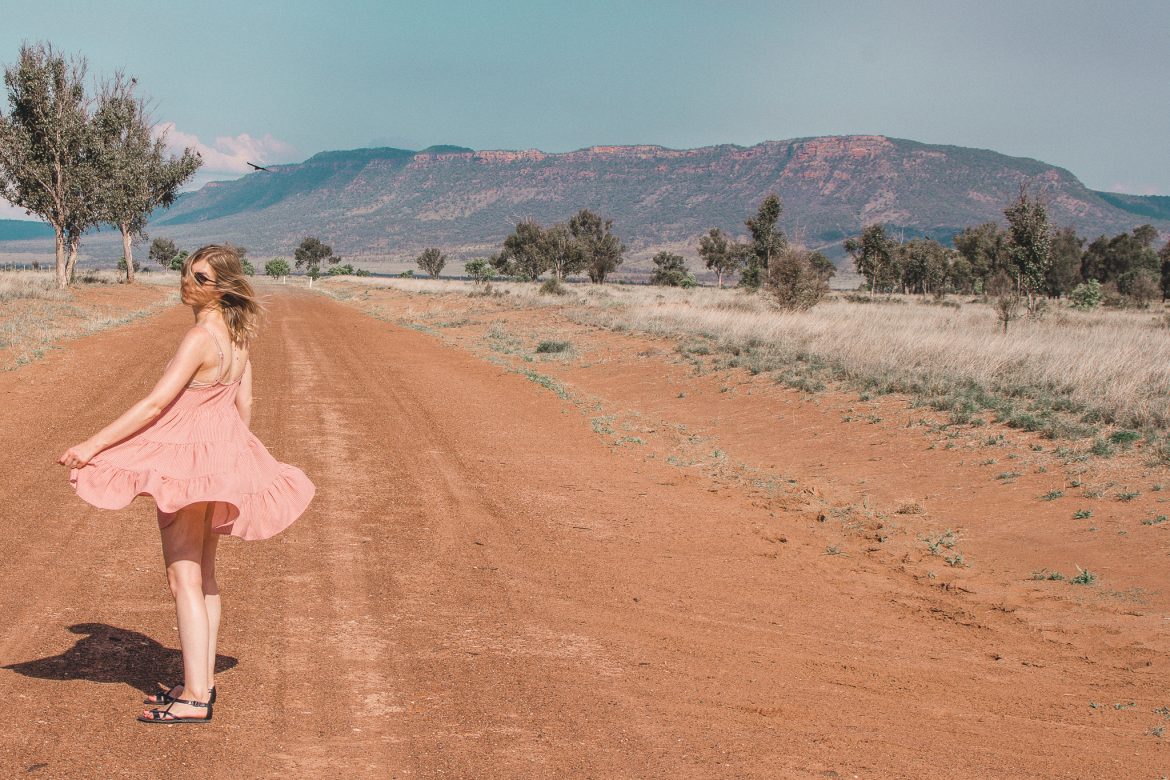 Isn’t it interesting where you sometimes end up, when traveling without a plan? In our case we ended up in Dingo, a small town two hours west from Rockhampton. When we were looking for a job to save some money to continue traveling through Australia, we applied for the Roadhouse job in Dingo. Not even really knowing what the job includes, what an actual roadhouse is and where the hell Dingo is located, we accepted the offer. One day later we drove to this unknown place, and kilometre by kilometre we noticed that the landscape became wilder and wilder. Beautiful fields, huge cactus plants and an amazing sunset were shaping our way to Dingo. There was so much space and no houses far and wide – It really felt like nowhere 🙂 Hello Dingo, our home for the next weeks

After a nice welcome from the team and our managers, we got our job introduction: While I would be working at the counter and serve the customers with fuel and food, my Partner would be a floater, which means filling up the fridges, cleaning the rooms and make sure everything is alright. Ok that sounds quite easy when you hear that. But I never used a tin, not even worked in the hospitality sector nothing said about the difficulties of understanding people with a strong dialect. While I was a bit lost sometimes in the first weeks (gosh especially when someone wanted to buy cigarettes without opening his mouth and clearly telling my which one of the 100 packages they wanted), I became quite comfortable with my job and really liked it in the end. You get to know the people and meet the same drivers every day but also some backpackers travelling along the Capricorn Highway. It was always nice to have a quick chat with all the people and I was very surprised about all the kindness of the people, especially when they get to know you a bit better. The grumpiest truck driver turned into my favourite customer 🙂 I learned not only how to use a tin (ok its not that difficult, but everything needs some time to get used to it), but also how to deal with those different kind of people. The most important thing I noticed, is that a smile can make someone’s day so much better and that people are happy to have a positive and friendly service – even when it is only for two minutes. I think thats like a golden rule in the hospitality sector – to share some positive vibes 🙂 In addition I am now an expert of all the junk food from the hotbox (didn’t even know what that was at the beginning). Kabana, Batt Sav, Crumbed Sausage, Sausage Roll, Chiko, Corn Jack, Potatoes Scollop or Chicken Tender? I know it all! Well, not the healthiest food, that’s for sure. At least I tried to animate some people to buy some salad instead, often with no success. But on my last day at work I was selling the veggie burger instead of the Works Burger after a promising advertisement of it ( I count this as my good deed). I also have to admit, that I am quite proud of myself staying in Dingo for ten weeks considering the snake season just started when we arrived and the next hospital was 30 minutes away by car. During our stay we have seen two snakes by ourself (even a brown one!) and we just missed to see another two. But well, that’s part of the outback experience I guess? To calm myself down, the first thing I bought was a bandage we could use in case get bitten by a snake. Luckily we never needed to use it 🙂 But apart from the “dangerous” wildlife, we also could call a huge kangaroo family our neighbours, which was awesome. Every morning and also in the evenings they came into our garden and it was just so nice to watch them. Luckily our favourite kangaroo (probably because of the recognisable floppy ear), came on one of the last evenings to say goodbye to us (well, that’s my interpretation at least :)). Making friends in the neighbourhood

Dingo is really a small and random place, where life is very simple. But that made it a great experience. It felt like slowing down and don’t take life to serious and get away from all the shallow. It was so great to meet all the local people and listen to their stories, sometimes it even felt to become a part of the community. We really enjoyed our ten weeks and we are so grateful for the new job experience, the lovely people we met and worked with and to have so much time for ourself (because there is literally nothing to do :)). It was also really nice to work together with the locals but also with other backpackers from all over the world. Even some situations can be difficult when working and living together with people of different characters, it felt like a kind of family. I guess that’s why saying goodbye was more difficult than expected. We definitely will always look back with very positive memories and a good feeling. All the best for all the people that made our time so great in Dingo! Thanks for our great time in Dingo Greetings from #ojai ✨ this place is so magical!

So happy to be back. ✨ #losangeles #california

Dreaming about our sunny days in Madrid last week.